HONOLULU (8 March 2018) Renowned scientists from throughout the Pacific today concluded a three-day meeting in Honolulu to develop recommendations on managing fisheries in Hawai‘i, American Samoa, Guam, the Commonwealth of the Northern Mariana Islands (CNMI) and the US Pacific Remote Islands Areas. Recommendations from the Scientific and Statistical Committee (SSC) of the Western Pacific Regional Fishery Management Council will be considered by the Council next week Wednesday through Friday at the Laniakea YWCA, Fuller Hall, 1040 Richards St., Honolulu. Fishermen and other members of the public are invited to attend the meeting and provide their comments and testimonies. Among the recommendations made by the SSC are the following: 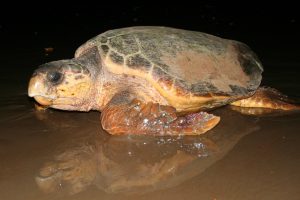 2018 longline-caught bigeye tuna limits for the US Territories in the Pacific: The SSC said the projected impacts of a 2,000 metric ton (mt) catch limit each for American Samoa, Guam and the CNMI should not lead to bigeye overfishing and the projected impacts of allowing each territory to transfer 1,000 mt or 2,000 mt of its limit are essentially the same. The territories are authorized to allocate their catch to federally permitted, US longline vessels through Specified Fishing Agreements.

American Samoa Large Vessel Prohibited Area (LVPA): Currently, vessels larger than 50 feet in length are prohibited from fishing within 50 nautical miles (nm) around the islands of Tutuila, Manu‘a and Swains. In 2015, the Council’s preference was to modify the LVPA exemption area to 12 nm around these islands for the local US longline fleet so as to improve their economic efficiency while taking into consideration the need to prevent overfishing and impacts on small vessels. Subsequently, a federal court determined that consideration must also be given to protecting American Samoa cultural fishing practices. The SSC found that the large vessel economic situation could be addressed while also preventing gear conflicts and supporting preservation of cultural fishing opportunities.

American Samoa swordfish trip limit: A measure implemented in 2011 limits the amount of swordfish that American Samoa longline vessels can land to 10 per fishing trip. The measure mirrored regulations applicable to the Hawaii deep-set longline fishery at the time, which have subsequently changed. While 97 percent of the American Samoa longline trips involve catches of less than 10 swordfish, there are instances when more than 10 swordfish are caught per trip. Swordfish discards as a result of the trip limit regulations result in unnecessary discards and loss of revenue for an economically distressed fishery. Unnecessary swordfish discards also reduce local swordfish supply including swordfish that may be given away to the community and for cultural reasons. The SSC recommended that the Council consider removing the swordfish trip limit. The SSC said such action would not have adverse impacts to the swordfish stock and would eliminate unnecessary regulatory discards that currently reduce revenue for the longline fleet as well as the local swordfish supply. The SSC noted that removal of swordfish trip limit would not lead to increased sea turtle interactions because gear configurations and fishing effort would remain the same.

For the complete SSC and Council meeting agendas and associated documents, go to www.wpcouncil.org/category/upcoming-council-and-advisory-body-meetings/ or email info@wpcouncil.org or phone (808) 522-8220.