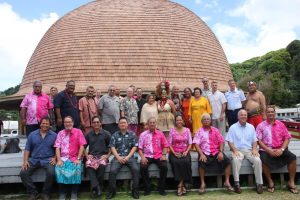 Gov. Moliga’s remarks, delivered by Council Member Henry Sesepasara, director of the American Samoa Department of Marine and Wildlife Resources, detailed numerous challenges that the Territory faces in its efforts to keep its fisheries viable. The governor provided a list of potential solutions, including the following:
Gov. Moliga recognized the Council’s efforts to support fishing infrastructure development and ongoing litigation over a final rule that would open a portion of the American Samoa Large Vessel Prohibited Area (LVPA) to American Samoa longline vessels. The Council recommended creation the LVPA in 2002 and an amendment to open a portion of it in 2015 to address changes in the fisheries and the need to meet national criteria for optimal yield.
Rauch’s remarks focused on the importance of fisheries to the “fabric of our communities.” He said it “defines who we are in many of our coastal communities.” He lauded the Regional Fishery Management Council system’s strength in providing a forum for an open honest debate, which has been “phenomenally successful across the country.” He said Secretary of Commerce Wilbur Ross has repeatedly talked about the US seafood trade deficit and has asked NOAA for ways to address it.
Fast Facts
The Council will continue its meeting in at the Rex Lee Auditorium on Oct. 18 and 19. For the full agenda and additional information, go to www.wpcouncil.org/category/upcoming-council-and-advisory-body-meetings/ or email info@wpcouncil.org or phone (808) 522-8220.