HONOLULU (25 June 2020)  During the months of May through July, Hawai’i fishermen and seafood consumers can rely on uku (grey snapper). While available year-round, this flavorful pink to white flesh fish, is most abundant during this time, which is when it spawns. These months also coincide with the period between the peak of the winter season for deep-water snappers and before the summer run of ‘ahi (yellowfin tuna). A versatile species, uku can be found in a wide range of depths and can be caught by trolling, bottomfishing and even spearfishing.
Yesterday, during the second day of its three-day virtual meeting, the Western Pacific Regional Fishery Management Council reviewed a new stock assessment for the main Hawaiian Island uku prepared by the National Marine Fisheries Service (NMFS). Established by Congress in 1976, the Council develops management plans and amendments and monitors federal fisheries operating in waters offshore of the State of Hawai’i, the Territories of American Samoa and Guam, the Commonwealth of the Northern Mariana Islands (CNMI) and the US Pacific Remote Islands Areas..
The Council directed staff to assess the scientific and management uncertainties in the fishery so that it could recommend the annual catch limit (ACL) for the fishery, when it meets next, in September. The Council will also explore splitting allocation of the ACL between the noncommercial and commercial fishing sectors. The Council’s recommendation will then go to the Secretary of Commerce for final approval. 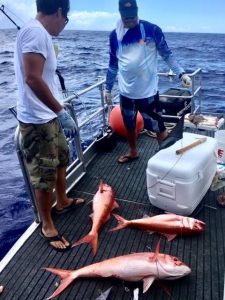 The American Samoa bottomfish fishery is a small-boat, daytime fishery that targets both shallow and deep waters, mostly nearshore.

Another major topic on the agenda yesterday was development of a rebuilding plan for American Samoa bottomfish. The most recent NMFS stock assessment for the fishery indicates that the fishery is overfished (too many fish have been removed) and subject to overfishing (too much fishing effort is occurring). Fishermen and the American Samoa Department of Marine and Wildlife Resources (DMWR) believe that the pessimistic assessment is due to poor and incomplete data.