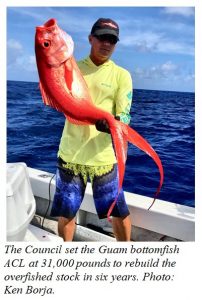 ​HONOLULU (04 December 2020) The Western Pacific Regional Fishery Management Council voted to adopt a bottomfish annual catch limit (ACL) of 31,000 pounds starting in fishing year 2023 to rebuild the overfished bottomfish stock in Guam. The limit corresponds to a 35-40% risk of overfishing and would allow the stock to replenish in six years. This option poses the least chance of the fishery exceeding the catch limit and extending the rebuilding time. The annual average bottomfish catch over the past several years is about 27,000 pounds. An in-season accountability measure will be implemented to track catch relative to the ACL. Federal waters will be closed to bottomfishing when the ACL is projected to be reached.

Manny Dueñas, president of the Guam Fishermen’s Cooperative Association (GFCA) and former Council member and chair, provided public comment on the bottomfish data. “Council staff said there were four years that the catch exceeded the ACL,” he noted, referring to data used in the bottomfish assessment and rebuilding plan. “Why didn’t anyone go back and look at this—maybe the ACL is wrong.” The GFCA was the only source of commercial fish dealer data for decades and the hub for the Pacific Islands Fishery Science Center (PIFSC) biosampling program. Council Executive Director Kitty Simonds said that staff will ask PIFSC to address Dueñas’s concerns.
The Council concluded its three-day virtual meeting with the following recommendations on other matters, among others.
Marianas Trench Marine National Monument (MTMNM): The Council recommended delaying the release of the draft MTMNM management plan for public review and comment until the Marianas Trench Monument Advisory Council (MTMAC) is seated and provides input. The 2009 MTMNM Proclamation by President Bush established the MTMAC to “provide advice and recommendations on the development of management plans and management of the monument.” With a draft management plan for the monument due to be released in December 2020, the Commonwealth of the Northern Mariana Islands (CNMI) Council members were concerned that the MTMAC wasn’t able to provide its timely input as required.
“The MTMAC is a critical advisory body, and it needs to be an active participant in the review of the draft management plan,” said CNMI Vice Chair John Gourley. “Conducting a public review without the MTMAC would be a great disservice to the Marianas communities.”
The monument is co-managed by NOAA, the U.S. Fish and Wildlife Service and the CNMI government.
Fishing Industry Advisory Committee (FIAC): The Council endorsed several FIAC recommendations including supporting a Pacific Island-wide seafood promotion program and working with the U.S. Coast Guard and State of Hawaiʻi Harbors Division to review policies on allowing longline vessels to shelter in place during tropical storms and hurricanes, among others. The current regulation requires vessels under 250 gross tons to vacate the harbor during hurricanes. The FIAC provides input and recommendations on management and conservation actions to the Council from an industry perspective.
Coronavirus Aid, Relief and Economic Security (CARES) Act: The Council requested the State of Hawaiʻi Department of Land and Natural Resources and the American Samoa Department of Marine and Wildlife Resources to work with the Pacific States Marine Fisheries Commission to further extend deadlines of CARES Act fishery applications, noting that many within the commercial fishing sector were unable to apply during previous application periods.
Council Officers: The following Council members were re-appointed as officers for 2021: Archie Soliai, chair; Howard Dunham, vice chair, American Samoa; Michael Dueñas, vice chair, Guam; John Gourley, vice chair, CNMI; and Edwin Watamura, vice chair, Hawaiʻi.
For the full agenda and background materials on the meeting, go to www.wpcouncil.org/meetings-calendars or contact the Council at info@wpcouncil.org or (808) 522-8220.