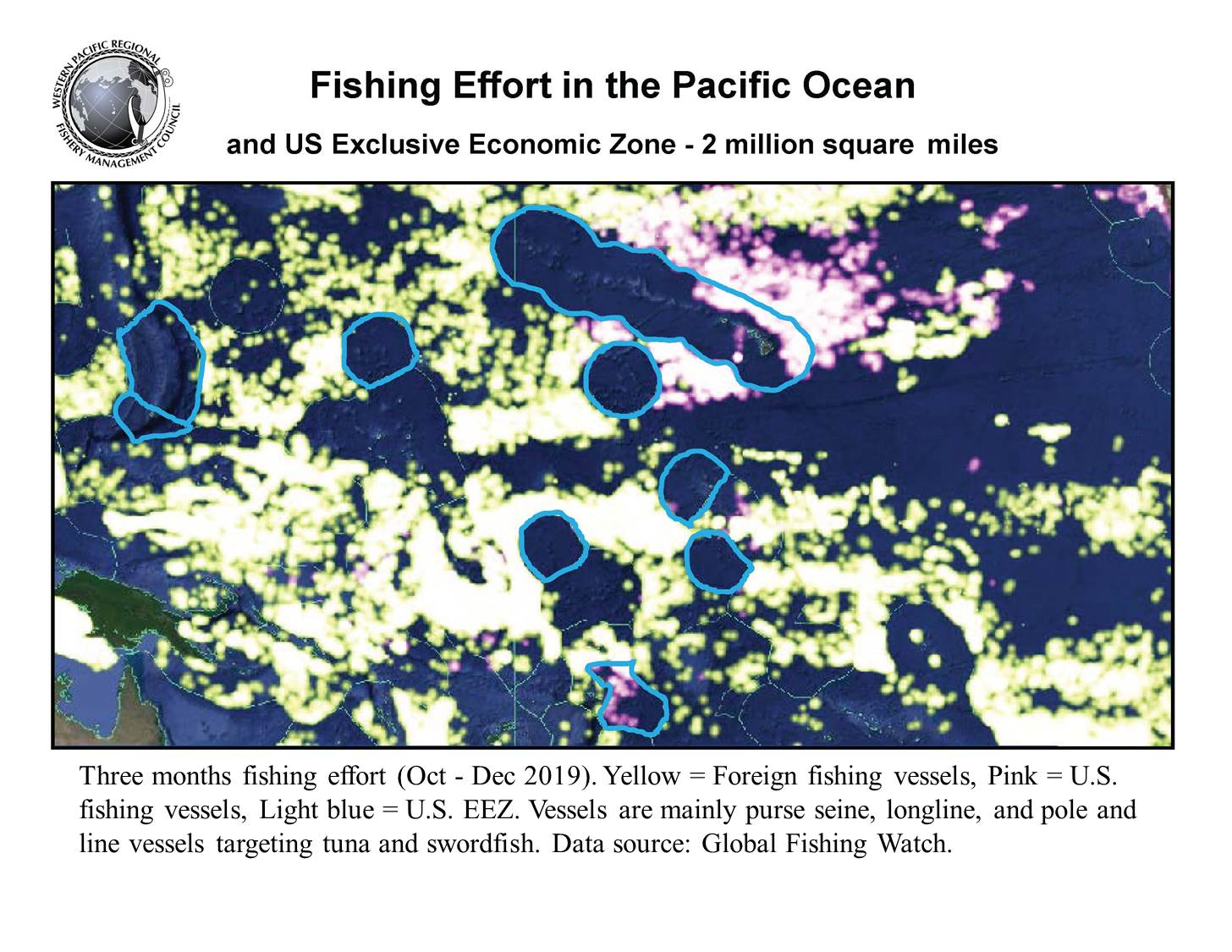 HONOLULU (23 June 2022) The Council supported permitting non-commercial fishing and prohibiting commercial fishing in the Monument Expansion Area of the Northwestern Hawaiian Islands (NWHI) (50 to 200 nautical miles). Council members were infuriated because continuing to close areas to fishing is an affront to indigenous peoples. Members stressed the importance of continuing indigenous cultures and practices. Guam Council Vice Chair Manny Dueñas said, “Permitting fishing perpetuates Hawaiian culture, and does not preserve it in a pickle jar. Whether they decide to or not, I want the Hawaiians to have the opportunity to be able to practice their culture.”

“It is important that we allow Native Hawaiian traditional practices, but minimize the impacts from non-native fishing,” said David Sakoda, Council representative for the State of Hawai‘i.

Council Executive Director Kitty Simonds asked, “How much more protection would we have by an overlay of the sanctuary? Closing these waters to protect migratory fish is futile when the fish move everywhere.”

The Council will develop the details for provisions related to non-commercial fishing in the NWHI, including Native Hawaiian practices and cooperative research to amend the Council’s Fishery Ecosystem Plans for initial action in September.

“With the additional restrictions that keep getting placed on indigenous fishermen, pretty soon no one will be able to go fishing. This has got to stop,” emphasized Monique Amani, Council member from Guam. “During the pandemic, the islands came together to utilize their subsistence traditions of fishing to support each other.”

Expansion would jeopardize the viability of the tuna cannery in American Samoa, the largest employer in the territory. The cannery relies on fish supply from the U.S.-flagged purse seine fleet, which has declined from 38 to 13 vessels. Closing the remaining U.S. waters of Howland, Baker, and Palmyra Islands forces U.S. purse seiners to fish farther away from American Samoa and thereby deliver their catch to closer ports, like Ecuador.

“More than half of the people in American Samoa live below the poverty level,” said Council Chair Archie Soliai. “If the president signs off on this, it will be in conflict with his executive order on advancing equity and environmental justice in underserved communities.”

CNMI Council member McGrew Rice added, “We need to consider that the Pacific Remote Islands monument is surrounded by more than 3,000 foreign vessels that fish in the Western and Central Pacific Ocean. All it’s doing is increasing fishing privileges for competing foreign fleets that don’t manage to our standards.”

Council members continued to express frustration with restricted access to fishing within monuments and sanctuaries in their areas. “What is the point of a monument expansion?” asked Guam Council member Chelsa Muña-Brecht. “Is it to preserve the pretty fish in the area? It doesn’t serve the community and doesn’t level the playing ground between U.S. and foreign fishers.”

The Antiquities Act that presidents use to establish monuments is not a transparent process, but implemented through a “top-down” approach that conflicts with equity and environmental justice principles. “The Antiquities Act was intended to protect burial sites and relics of indigenous people. It is not an appropriate approach to marine conservation – we have the MSA for that,” said John Gourley, Council vice chair from the CNMI. “Monument designation bypasses the courtesy of involving affected communities.”

Hawai‘i Council member Matt Ramsey said, “To avoid unintended consequences, it’s critical that stakeholder engagement occurs early on in the process of developing a fisheries management proposal. Those most impacted by a management action need to have an opportunity to learn about the proposed action and share their perspective.”

The Council will ask President Biden for a comprehensive evaluation of the unintended consequences of the proposed expansion and that any measures be evaluated through a transparent and public process prior to implementation.