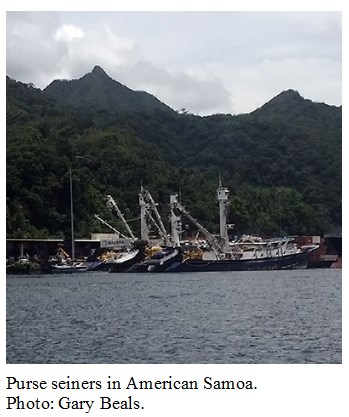 HONOLULU (23 September 2022) At its meeting this week, the Council reviewed alternatives for fishing regulations in the Monument Expansion Area (50-200 nautical miles) of the Northwestern Hawaiian Islands. Among the alternatives are maintaining the status quo, where fishing regulations would mirror those in the Papahānaumokuākea Marine National Monument, and requiring a federal subsistence fishing permit for Native Hawaiian practices with a definition of subsistence and options for including customary exchange.

“It may be easier to manage and enforce fishing regulations in the MEA if they align with the existing monument regulation framework,” said David Sakoda, representative for the State of Hawai‘i.

Shaelene Kamaka‘ala, new Council member from Hawai‘i, noted “it would be helpful to educate the community on what traditional uses for this area have been.”

Prior to final action in December, the Council will hold public meetings to gather information to help shape the final alternatives. These alternatives will be subject to standard federal regulatory requirements such as permit sanctions, gear restrictions, at-sea observer coverage and other provisions required under the Fishery Ecosystem Plans. Public meetings will be announced through the Federal Register and the Council’s website (www.wpcouncil.org) in the near future.

Council members discussed the importance of maintaining tuna supply to the StarKist cannery in Pago Pago, American Samoa, which relies heavily on tuna brought in from U.S.-flagged purse seiners. The Council requested that the National Marine Fisheries Service (NMFS) proceed with a 2015 proposed rulemaking to recognize a distinct American Samoa purse seine fleet comprised of some U.S.-flagged vessels. This rulemaking could potentially recognize an American Samoa fishery that would be entitled to privileges within the Western and Central Pacific Fisheries Commission (WCPFC) granted to small island developing states (SIDS) and participating territories. These privileges include exemptions to seasonal fish aggregating device closures and limits to high seas fishing access. This would incentivize U.S.-flagged American Samoa vessels to fish in WCPFC waters and offload in American Samoa, but NMFS has yet to proceed with this.

Adding to this disappointment was a proposed rulemaking this month to separate U.S. purse seine effort limits into a high seas effort limit and an effort limit within the U.S. exclusive economic zone (EEZ). Council members expressed their concern that there is not a sufficient public comment period for this rulemaking and about the disproportionate burden this places on the territory. In previous years, NMFS had combined limits to high seas and U.S. EEZ purse seine fishing days as a single limit to optimize fishing opportunities.

Council Chair Archie Soliai expressed his dismay with NMFS not proceeding with rulemaking to recognize a distinct American Samoa fleet, yet moving forward with regulations for limits that could potentially drive U.S.-flagged purse seiners to fish in the eastern Pacific and be less likely to offload in Pago Pago. “This proposed rule will have significant negative consequences for American Samoa and put the territory at significant risk. I realize the United States needs to comply with the WCPFC. But why does our government not regulate the U.S.-flagged vessels in American Samoa under the WCPFC as a SIDS?”

“Incoming tuna to supply the cannery has been going down since 2008,” said Will Sword, Council vice chair for American Samoa. “The feds keep giving away what we need to keep our production going. This does not provide justice for us with what we produce for the nation.” Approximately 100,000 metric tons of tuna are offloaded in Pago Pago each year, of which the majority are provided by U.S.-flagged purse seine vessels.

The Council will respond to the proposed rulemaking for separate high seas and U.S. EEZ effort limit for U.S. purse seine vessels, requesting NMFS consider the negative impacts that the rule will have on American Samoa and an extension for the comment period to Nov. 1, 2022. The results of a 2016 study on the Effort Limit Area for Purse Seine closure in 2015 found it had an impact of up to $110 million during that period.

Other Council recommendations included requesting an update from the NOAA Office of National Marine Sanctuaries on the status of the Marianas Trench Marine National Monument on the sanctuary nomination inventory list, and revisions to a NMFS proposed rule on coral critical habitat to reflect new species information and comments from the Council and Territory governments.

2023-2026 Advisory Panel Members
The Council appointed new members to its Advisory Panel for the 2023-2026 term. The Council receives advice from a panel of recreational and commercial fishermen, charter boat operators, buyers, sellers, consumers and others knowledgeable about fisheries in the region, including indigenous fisheries. The panel includes subpanels for the American Samoa Archipelago, Hawai‘i Archipelago and Mariana Archipelago. Clayward Tam was chosen as the chair, and the vice chairs are Gil Kuali‘i (Hawai‘i), Nathan Ilaoa (American Samoa), Richard Farrell (Marianas – CNMI) and Judy Amesbury (Marianas – Guam). A full list of names will be available soon on the Council website.