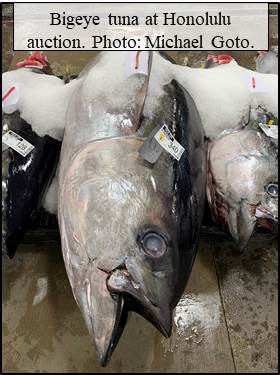 HONOLULU (09 December 2021) The Western Pacific Regional Fishery Management Council discussed outcomes from the December Western and Central Pacific Fisheries Commission (WCPFC) meeting, including proposed protections on sharks, and conservation and management of South Pacific albacore and bigeye tuna. Despite scientific advice, the 18th WCPFC meeting ended without an agreement on increasing Hawai‘i longline fishery bigeye tuna catch limits, or reducing total catch on South Pacific albacore with a goal of increasing catch rates for fisheries such as American Samoa. The tone of the negotiations was unfavorable for U.S. interests.
The U.S. objectives included a 3,000 metric ton increase in the bigeye tuna catch limits for the Hawai‘i longline fishery, and that purse seine vessels based out of American Samoa, a small island developing state, have recognized privileges. The U.S. proposed prohibiting wire leaders on fishing gear to promote shark conservation and increasing observer coverage from 5% to 10%. None of these measures were adopted.
During Council deliberations, it was decided that a completely new strategy is needed for the U.S. government to tie in the geopolitical interests of U.S. fisheries in the Pacific through a high-level campaign with increased multi-federal agency engagement. Council Executive Director Kitty Simonds noted, “This can only be done by all federal agencies–Departments of State, Interior, Homeland Security and even Defense–working together well in advance of meetings to make the landscape workable for us at the WCPFC.”
For more information, visit https://meetings.wcpfc.int/meetings/wcpfc18.
—
Regarding the proposed Northwestern Hawaiian Islands sanctuary designation, the Council discussed several considerations for potential noncommercial fishery regulations, including customary exchange. The initial discussion looked at Council-developed regulations in the Pacific marine national monuments and previous Council scoping in Hawai‘i.
NOAA’s Office of National Marine Sanctuaries initiated the public process in November 2021, and the Council is formally consulted to provide fishery regulations. The Council will provide NOAA with a response in advance of its March 31, 2022, deadline.
—
The Council discussed the feasibility of a limited cultural take for honu (green sea turtle, Chelonia mydas) in the main Hawaiian Islands. Dave Hogan, U.S. State Department, told the Council that the Inter-American Convention for the Protection and Conservation of Sea Turtles (IAC) and protection under the Endangered Species Act are both barriers to proceeding with consideration of a cultural take for any area under the U.S. jurisdiction. The U.S. is party to the IAC that prohibits the intentional capture, retention or killing of, and domestic trade in, sea turtles, their eggs, parts or products. The IAC does allow for an economic subsistence exception, but not cultural take for indigenous use.
Manny Dueñas, Council vice chair for Guam, expressed his dismay, saying he believed in perpetuating culture, rather than “pickling it and putting it in a jar.” Council members from across the jurisdictions pressed the Council to pursue recognition of the indigenous cultural harvest of honu within the IAC.
—
The Council continues to prioritize efforts to support equity and environmental justice (EEJ) for underserved communities in the Western Pacific Region, and recommended that the National Marine Fisheries Service (NMFS) use data to help characterize EEJ impacts region-wide.
At the Council Coordination Committee (CCC) meeting in October 2021, the Council presented regional EEJ approaches and needs alongside the North Pacific Council and NOAA. The CCC decided to convene a workshop ahead of the committee’s next meeting in May 2022. The Western Pacific Council is taking a lead role in the development of the workshop expected to be held in Hawai‘i in February 2022.
—
A CCC subgroup on area-based management created a working definition for conservation to address the goals under the president’s America the Beautiful 30×30 initiative. The working definition of a conservation area is an 1) established, geographically defined area, with 2) planned management or regulation of environmentally adverse fishing activities, that 3) provides for the maintenance of biological productivity and diversity, ecosystem function and services (including seafood production).
The Council will send a letter to NMFS that conservation areas should: 1) be informed by empirical evidence and scientific veracity, 2) be adequately monitored and enforced, 3) be adaptive to address climate change—especially in the Pacific Islands, and 4) recognize existing subsistence and native rights.
The Council manages federal fisheries operating in waters offshore of the State of Hawai‘i, the Territories of American Samoa and Guam, the CNMI and the U.S. Pacific Remote Islands Areas. The next meeting of the Council will be March 22-24, 2022.
← Previous Post Next Post →