HONOLULU (17 October 2018) Scientists from throughout the Pacific meeting this week in Hilo on the island of Hawai‘i have made the following recommendations on federally managed fisheries of Hawaii, American Samoa, Guam, the Commonwealth of the Northern Mariana Islands (CNMI) and the US Pacific Remote Islands. The Scientific and Statistical Committee (SSC) of the Western Pacific Regional Fishery Management Council will conclude its meeting later today. The SSC recommendations will then be considered by the Council at its 174th meeting to be held Oct. 23 and 24 in Saipan, CNMI, and Oct. 26 and 27 in Guam. Under the Magnuson-Stevens Fishery Conservation and Management Act of 1976, the Council has authority over fisheries seaward of state waters in Hawaii and other US Pacific Islands. 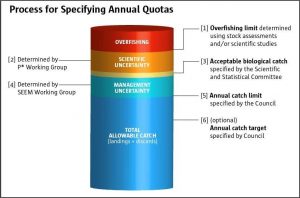 During the first two days of the meeting the SSC specified annual biological catches (ABCs) for a suite of managed species. The Council will consider the ABC specifications in recommending annual catch limits (ACLs) for these species. ACLs can be equal to or lower than the ABCs set by the SSC, depending on management uncertainties. The Council’s ACL recommendations will be transmitted to the Secretary of Commerce for final approval.

The SSC noted the general underutilization of the stocks for which it specified ABCs and discussed how best to incorporate this into ACL specification with little to no fishing effort. The SSC also noted that under-reporting continues to be an issue for most of these stocks. The last deep-water shrimp assessment was in 1988, and there is a clear need to update the maximum sustainable yield (MSY) for this stock. The SSC specified the following ABCs:

The SSC also recommended refining the essential fish habitat (EFH) for precious coral in the Hawaii Archipelago and updating the EFH information for the Fishery Ecosystem Plan for the Hawaii to incorporate new data from submersible research dives. For deep-water precious coral (e.g., pink and bamboo), the SSC recommended defining the geographic extent of precious coral EFH based both the existing EFH beds as well as  the newly identified beds. For the shallow water precious corals, the SSC recommended updating the EFH definitions with the habitat characteristics and geographic extent. This description would increase the percentage of precious coral observations contained within the EFH areas of the MHI from 56 percent to 92 percent. The SSC noted that bottom current is important to understanding precious coral habitat, but data on the bottom current data is not available now or in the foreseeable future.

For complete agendas and background materials on these meetings, go to www.wpcouncil.org/category/upcoming-council-and-advisory-body-meetings or contact the Council at info.wpcouncil@noaa.gov or (808) 522-8220.