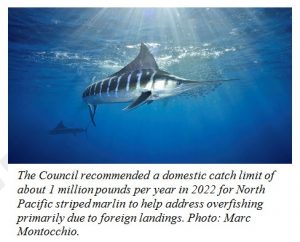 HONOLULU (25 March 2021) To address the relative impacts of U.S. vessels on the internationally overfished North Pacific striped marlin, the Western Pacific Regional Fishery Management Council recommended an initial catch limit of approximately 1 million pounds (457 metric tons) in 2022. This applies to all U.S. vessels fishing north of the equator and west of 150 °W. An in-season accountability measure would also be implemented to track catch relative to the limit. Retention and landing of striped marlin would be prohibited in longline fisheries when the catch limit is projected to be reached.

Due to highly uncertain historical foreign catch and discards, the Council noted the U.S. relative impacts are unclear. This uncertainty in part will likely be reconciled in 2022 with new analyses by an international science provider. Beginning in 2023, the Council recommended a catch limit corresponding to a proportional fishery-wide reduction to end overfishing. Based on the current best scientific information available, the limit would be 690,000 pounds (313 metric tons), which the Council will specify for 2023.

U.S. Pacific fisheries, including the Hawai‘i longline fishery, landed approximately 19% of reported striped marlin catch from 2013 to 2017, including discards that only the United States reports. “The Hawai‘i fishery has a relatively small impact on the striped marlin stock,” said Council member Roger Dang, owner of longline vessels and Fresh Island Fish of Hawai‘i. “We must remain humble in what we can do and not exhaust our resources without having any real conservation benefit.”

The Council directed staff to send letters to the Department of Commerce and Department of Interior regarding President Biden’s Executive Order 14008 on Tackling the Climate Crisis at Home and Abroad. The letters will address strategies and conservation of 30% of waters by 2030 and provide information on how to increase the resilience of fisheries and protected species. Regarding the President’s EO 13985 on advancing racial equality and underserved communities, the Council asked staff to review the EO as it applies to the Council’s fishery ecosystem plans, programs and Pacific Island fishing communities.

Council Executive Director Kitty Simonds emphasized that “historically, all of our indigenous people in the Western Pacific Region are underserved, marginalized and adversely affected by persistent poverty and inequality.” 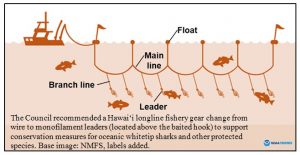 The Council took a step towards a regulatory change to prohibit the use of wire leaders in the Hawai‘i deep-set longline fishery, including a requirement to remove trailing gear from Endangered Species Act-listed oceanic whitetip sharks. This supports the Hawaii Longline Association (HLA) initiative to voluntarily switch from wire to monofilament nylon leaders announced in December 2020 and helps to address the Council’s domestic obligations for the relative impacts of U.S. vessels on international overfishing of Western and Central Pacific Ocean oceanic whitetip sharks.

A joint public comment from HLA, The Ocean Foundation and The Pew Charitable Trusts emphasized their shared concern for the oceanic whitetip shark stock and support for the transition of the Hawai‘i-based fleet away from wire leaders, focus on crew training and agreement on key actions needed to improve the status of the stock.

The Council manages federal fisheries operating in waters offshore of the State of Hawai‘i, the Territories of American Samoa and Guam, the Commonwealth of the Northern Mariana Islands and the U.S. Pacific Remote Islands Areas.