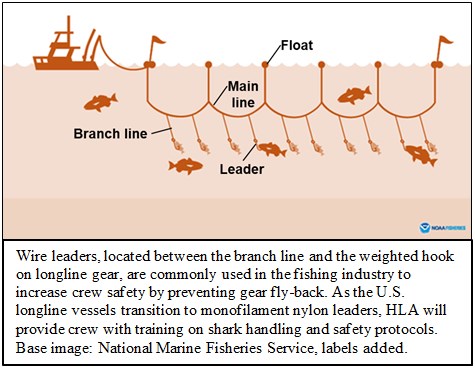 Oceanic whitetip sharks are listed as threatened under the Endangered Species Act and are subject to overfishing and overfished in the Western and Central Pacific Ocean (WCPO), primarily due to foreign fishing. U.S. longline impacts on oceanic whitetip sharks are only about 6% of the catch in the WCPO. Recognizing the low impact on the stock, the Council previously recommended that wire leader usage be reduced in international longline fisheries.

Available scientific information supports the fishing gear change from steel wire to monofilament nylon leaders to facilitate a shark’s ability to free itself from an accidental hooking by biting through the line. The measure is expected to reduce the oceanic whitetip shark catch and mortality by about 30%.

This conservation effort was initially developed by the Hawaii Longline Association (HLA) as a voluntary transition presented at the Council’s December 2020 meeting. Since wire leaders are used as a safety measure to prevent fly-back of the weighted swivel, HLA will provide crew with training on shark handling and safety protocols. The Council emphasized the importance of balancing crew safety with the requirement to remove trailing gear, and recommended that fishermen target removing trailing gear down to less than 1 meter (about 3 feet), only if it is safe to do so.

The Council recognized that the wire leader prohibition would also reduce the already low interactions with silky sharks in U.S. longline fisheries. The WCPO silky shark stock is experiencing overfishing, but not overfished. The relative impact of the U.S. longline vessels is estimated at 0.8% of WCPO catches based on observer data and 0.4% based on market data.

The Council concluded the first day of its three-day virtual meeting today with discussions and recommendations regarding pelagic and international fisheries. The meeting continues through June 24, 2021, by web conference (Webex). Instructions on connecting to Webex, agendas and briefing documents are posted at www.wpcouncil.org/meetings-calendars.

The Council manages federal fisheries operating in waters offshore of the State of Hawai‘i, the Territories of American Samoa and Guam, the Commonwealth of the Northern Mariana Islands (CNMI) and the U.S. Pacific Remote Islands Areas.