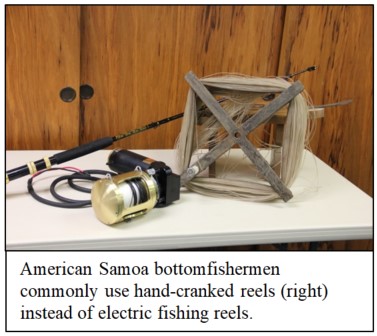 ​HONOLULU (23 June 2021) The Western Pacific Regional Fishery Management Council voted to defer action on the rebuilding plan for the federally managed bottomfish complex in American Samoa at its virtual meeting today in Honolulu.

In February 2020, the National Marine Fisheries Service (NMFS) informed the Council of a change in stock status for American Samoa bottomfish to overfished and experiencing overfishing. The Magnuson-Stevens Fishery Conservation and Management Act requires the Council to develop a rebuilding plan within 15 months of notification and rebuild the overfished stock within 10 years. During plan development, a new alternative of 5,000 pounds emerged that would rebuild the stock in 10 years with a 27% risk of overfishing.

While the Council opted to consider this alternative at its September 2021 meeting, members expressed their dismay that it was the best choice available. They noted the disparities in catchability between using hand-cranked reels, common among local bottomfishermen, and electric reels. Council Executive Director Kitty Simonds said that changes in fishing power through time would be a good topic for fishermen to discuss with the NMFS scientists at the data workshops planned for the fall.

Similarly, NMFS noted in February 2020 that the federally managed Guam bottomfish stock complex is overfished but not experiencing overfishing. While a new alternative emerged during the rebuilding plan development, it would only add 500 pounds while extending the rebuilding timeline by two years. The Council elected to retain the annual catch limit (ACL) of 31,000 pounds adopted at its March 2021 meeting, starting in fishing year 2022. The limit corresponds to a 41% risk of overfishing and would allow the stock to replenish in eight (8) years. This option poses the least chance of the fishery exceeding the catch limit and considers fishing community needs.

The annual average bottomfish catch over the past several years is about 27,300 pounds. An in-season accountability measure will be implemented to track catch relative to the ACL. Federal waters will be closed to bottomfishing when the ACL is projected to be reached.

Council members representing American Samoa, the Commonwealth of the Northern Mariana Islands (CNMI) and Guam voiced their continued frustration with the ongoing NMFS coral critical habitat designation process. NMFS issued the proposed rule in November 2020 and the public comment period closed in late May 2021 after multiple requests from the territories to provide additional time for review.

Seven species of corals listed under the Endangered Species Act (ESA) occur around American Samoa, Guam, the CNMI and the Pacific Remove Island Areas. Their habitat in U.S. waters around the territories represents less than 1% of these species’ full distribution across the Pacific and Indian Oceans. Critical habitat under the ESA can only be designated in U.S. jurisdictions. The proposed designations encompass most shallow waters around the island territories.

The proposed rule’s focus on the territories prompted responses from each area’s governors, resource management agencies and legislatures. John Gourley, CNMI Council member, highlighted the common messages from all of these entities to NMFS, noting that the regions expressed their disappointment in the lack of coordination with the local resource management agencies and expertise in the development of the proposed rule.

Chelsa Muña-Brecht, Council member and Guam Department of Agriculture director, said local coral experts were not consulted to gather the best scientific information available. Council Chair Taotasi Archie Soliai added that “clearly consultation with local agencies is a necessity on these types of issues.” Corals are notoriously difficult to identify, even by experts, and there is much uncertainty about the existing records for the territories.

A March letter from NMFS Regional Administrator Michael Tosatto to the territories said his staff would work directly with local agency staff to gather relevant information to incorporate into the final coral critical habitat rule. Gourley said that no contact has been made to date.

According to the ESA, NMFS is to issue a final rule on the coral critical habitat designation by November 2021. Territories have requested the final decision to be delayed until more complete scientific information are available to provide the basis of the designation.

The Council requested that staff include critical habitat issues in a letter that will be sent to the Biden Administration regarding Executive Order 13985 that encourages comments on barriers to racial equality and underserved communities. More than 75% of the population in the Pacific Islands Region identify as indigenous, Asian American, Pacific Islander or other persons of color—all groups that fall under the EO’s definition of underserved communities that have historically been denied equitable treatment.

Prior to the beginning of the third day of the Council meeting, at 10:30 a.m. (HST) June 24, 2021, two Council-produced films will be shown about fishing and fishing management in Hawai‘i. The 18-minute film Living the Legacy: The Northwestern Hawaiian Islands documents the history of U.S. Pacific Islands fisheries, focusing on the 1920s through 2000. The 12-minute film The Northwestern Hawaiian Islands explores the two opposing ideas that the region should be either closed to all activities, or should be used, studied and managed.

The Council meeting concludes tomorrow by web conference (Webex). Instructions on connecting to Webex, agendas and briefing documents are posted at www.wpcouncil.org/meetings-calendars.