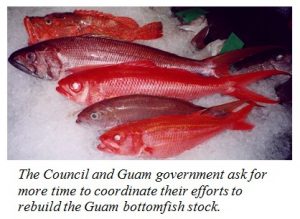 HONOLULU (25 March 2021) The Western Pacific Regional Fishery Management Council deferred action on the Guam bottomfish stock rebuilding plan to a future meeting yesterday in Honolulu. This allows for a coordinated effort among the relevant agencies to finalize the Council’s rebuilding plan and develop the Territory’s Bottomfish Fishery Management Plan—essential to ensure the stock is rebuilt in the shortest time possible, not more than 10 years, as required by the Magnuson-Stevens Act (MSA).
A National Marine Fisheries Service (NMFS) 2019 stock assessment determined the Guam bottomfish stock to be overfished. In December 2020, the Council chose a preferred alternative annual catch limit (ACL) of 31,000 pounds. The stock would be rebuilt within six (6) years if catches are kept below that limit. NMFS updated its biomass projection in January 2021, which resulted in a rebuilding projection of nineteen (19) years instead of six (6) years. An alternative that addresses the rebuilding requirement is an ACL of 27,000 pounds. If catch is kept below this level, the stock would rebuild in eight (8) years. Council members again reiterated their dismay that any projection developed continues to use the same flawed creel survey data that has manifested into this current management crisis.
NMFS, the federal agency in charge of assessing fisheries stocks, failed to address the data-limited situation for decades. Guam Vice Chair Michael Dueñas, exasperated by the many regulatory fishing regimes, both federal and local, expressed his deep concern about another regulation that would dramatically curtail fishing. Guam is 212 square miles—a 30-mile-long and 1 to 8.5-mile-wide small island where most citizens depend on the ocean to feed their families. “We are talking about a hook-and-line fishery. How can a difference of 4,000 pounds set us back from six (6) to nineteen (19) years to rebuild the stock? We need to find a model that works for data-poor areas.”
Chelsa Muña-Brecht, Council member and Department of Agriculture Director, said the sudden change in options begs a delay in decision-making. The fishing community of Guam needs to know why and how these numbers are generated. “With the COVID-19 pandemic, unemployment is at a record high and people are turning to fishing to survive. We have 80 fishers registered on the Council’s Catchit Logit electronic data reporting app and only 12 are commercial fishers that catch thousands of pounds of fish, unlike purse seiners that capture hundreds of tons per trip and up to 10,000 tons per year per boat.”
—
Seven years ago, NMFS listed seven corals under the Endangered Species Act (ESA) that occur around American Samoa, Guam, the Commonwealth of the Northern Mariana Islands (CNMI) and the Pacific Remote Island Areas. NMFS is now proposing coral critical habitat designation following a lawsuit due to their failure to act within one year of the species listing.
Council members expressed their frustration with the ‘broad brush’ approach used to draw the critical habitat included in the proposed rule. The maps show most of the shallow areas around the islands to be within the boundaries of the critical habitat designation, rather than only depicting the essential features that comprise the actual critical habitat. CNMI Vice Chair John Gourley said that these maps are not appropriate for use in future ESA consultations, which are required on any federally authorized, permitted or funded projects that may affect designated critical habitat. Territory resource agencies are developing revised maps that exclude non-essential habitat features and other existing managed areas that do not qualify.
To compound the issues, NMFS announced in January 2021 that it would initiate the first five-year status review as required under the ESA, and is also preparing a series of recovery planning workshops in May 2021. Gourley emphasized that these reviews should be completed before the coral critical habitat designation so that NMFS can base its decisions on better information. “The cart is before the horse because we’re doing critical habitat without having full information about the corals in front of us in order to make informed decisions,” said Gourley. Corals are notoriously difficult to identify, even by experts, and there is much uncertainty about the existing records for the territories.
The public comment period has now been extended to May 26, 2021, and comments can be submitted online at www.regulations.gov; search for “NOAA-NMFS-2016-0131.” The Council meeting concludes today by web conference (Webex). Instructions on connecting to Webex, agendas and briefing documents are posted at www.wpcouncil.org/meetings-calendars.