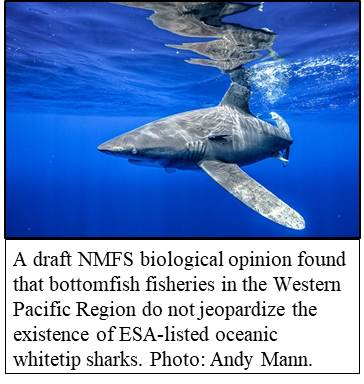 ​HONOLULU (17 June 2022) The Council’s Scientific and Statistical Committee (SSC) supported part of a draft bottomfish fishery biological opinion (BiOp) that concluded fisheries in Hawai‘i, American Samoa, the Northern Mariana Islands and Guam are not likely to jeopardize the continued existence or recovery of oceanic whitetip (OWT) sharks. The BiOp is one step in a formal consultation process that was triggered in 2018 after the National Marine Fisheries Service (NMFS) listed the sharks as threatened under the Endangered Species Act.

“We appreciate that the 3-year review rendered a no jeopardy opinion and fully concur with this conclusion,” said SSC Chair James Lynch. “No need exists for further restrictions on these fisheries.”

Bottomfish fisheries in the Western Pacific Region are small (thousands of pounds caught annually vs. millions of pounds caught in pelagic fisheries), and provide fish mainly to local markets in the four areas. OWT interactions with the bottomfish fisheries are rare, as the fishermen target fish at 300 to 1200 feet, whereas OWT sharks’ preferred habitat is in the upper 500 feet of the water column in the open ocean. The draft BiOp analyzes the potential impact of one OWT mortality every five years in each of the areas. This represents less than 0.0001% of the OWT population estimate of more than 775,000 in the Western and Central Pacific Ocean.

The draft BiOp includes a reasonable and prudent measure (RPM) that requires NMFS to monitor and report on total estimated OWT shark interactions in the bottomfish fisheries. RPMs are non-discretionary measures that are necessary and appropriate to minimize the impacts of incidental take.

While the SSC recognized the need for improved species identification and fishery information, it found the RPM was neither reasonable nor prudent for OWT sharks. Impacts to the species are minimal, and monitoring itself does not reduce impacts of bottomfish fisheries. The SSC also recommended any monitoring of OWT interactions be integrated into existing programs, as it would not be feasible to design an independent monitoring program to detect rare events.

The draft BiOp is one of three outstanding from NMFS, with the others pertaining to the Hawai‘i deep-set longline and American Samoa longline fisheries. The Council will consider the SSC’s review, along with input from the Council’s regional Advisory Panels, at its meeting next week.

The SSC also discussed a NMFS update on the review of the agency’s Serious Injury Determination Policy. NMFS uses the policy to evaluate whether the outcome of a marine mammal interaction with a fishery is likely to lead to a mortality of the animal, such as in the case of false killer whales (FKWs) that may be accidentally hooked and released alive in the Hawai‘i deep-set longline fishery.

The SSC recommended that NMFS consider hook type as key information in determining whether an interaction outcome will be categorized as a “serious injury,” which is defined as any injury that likely results in mortality. Under the existing policy, location of hooking and amount of trailing gear left on the animal are some of the information used to determine the degree of injury, but not hook type.

The Hawai‘i deep-set longline fishery has been required to use “weak” circle hooks since 2013 that are intended to straighten to facilitate FKWs to escape without trailing gear. In general, the shape of the circle hooks makes it more likely for the animal to become hooked along the edge of the mouth rather than internally.

Lip-hookings are considered less detrimental to the animal than hooks in the jaw or ones that are swallowed. In 2021, six out of the 15 FKW interactions recorded by federal observers onboard the Hawai‘i deep-set longline vessels had the hook or the crimp immediately above the hook visible around the mouth. However, out of the six, five were categorized under the existing policy as a serious injury.

NMFS’s proposed revision of the Serious Injury Determination Policy is expected to be made available for public comment during summer 2022.