HONOLULU (8 June 2017) Renowned scientists from throughout the Pacific will convene in Honolulu June 13 to 15 to provide recommendations on managing fisheries in Hawai‘i, American Samoa, Guam, the Commonwealth of the Northern Mariana Islands (CNMI) and the US Pacific Remote Islands Areas.  The meeting of the Western Pacific Regional Fishery Management Council’s Scientific and Statistical Committee (SSC) is open to the public and runs 8:30 a.m. to 5 p.m. at 1164 Bishop St., Suite 1400. Major agenda items include the following:

Options for Fishing Regulations in the Papahanaumokuakea Marine National Monument Expanded Area: Presidential Proclamation 9478 set aside an area adjacent to the Papahanaumokuakea Marine National Monument as a Monument Expansion Area (MEA). The proclamation prohibits commercial fishing and anchoring on coral but allows regulated Native Hawaiian practices and non-commercial fishing. The Council is tasked with recommending fishing regulations for the MEA consistent with the proclamation.

Acceptable Biological Catch for Main Hawaiian Islands Kona Crab: The SSC will recommend a 2017 acceptable biological catch (ABC) for Hawai‘i Kona crab. The ABC is the foundation on which an annual catch limit (ACL) is based. A 2015 stock assessment reviewed by the Center for Independent Experts indicates the stock is likely overfished. The assessment assumed a male and female catch retention fishery. However, State of Hawai‘i regulations have allowed retention of only males since 2007. In earlier discussions, the SSC expressed concern about the impacts of non-retention of female crabs. The current ABC of 27,600 pounds is three times higher than the sustainable catch level based upon the 2015 stock assessment. NMFS will present alternative ABCs for the SSC to consider.

Harvest of slipper lobster (left) in CNMI and jacks (right) in Guam have surpassed their annual catch limits. Some overages may be due to better catch reporting and changes in the survey protocol.

Annual Catch Limits: Several species of fish were harvested over their 2016 annual catch limit (ACL). American Samoa exceeded its ACL for rabbitfish (Siganidae); Guam for jacks (Carangidae); and CNMI for slipper lobster. The SSC will review the rationale for these overages, which in some cases may be due to better reporting of catches and changes to the survey protocol. 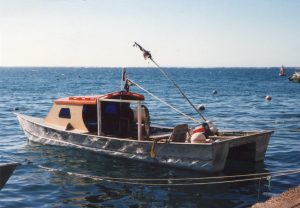 In 2016, US longline vessels based in American Samoa were provided with an exemption that allowed them to fish in waters from 12 to 50 nautical miles (nm) from shore within the American Samoa Large Vessel Prohibited Areas (LVPAs) while continuing to prohibit them from fishing 0 to 12 nm from shore. The exemption recognized the precarious economic status of the fishery, the uncertainty surrounding the future of the Territory’s tuna canneries and the reduction of the small-boat alia longline fishery to a single active vessel. The Council had developed the LVPA to mitigate potential gear conflicts between the larger longline vessels and the alia fleet, which numbered around 40 in 2002. Council staff will present potential options for the American Samoa Large Vessel Prohibited Areas (LVPAs), following a court decision in early 2017 that vacated the exemption as it had not considered the American Samoa Deeds of Cessions as other applicable law, and specifically the need to protect American Samoa cultural fishing practices. The SSC will consider defining American Samoa cultural fishing.