Fishing in Hawaii has its roots in many of the different cultures and ethnicities that make up the islands. Native Hawaiians depended on ocean resources for both sustenance and cultural activities. Immigrants brought to Hawaii to work on the plantations also brought with them their own fishing methods and ocean culture. From the native fishermen with a torch and spear to the large vessels fishing on the high seas, throughout its history, fishing has played a vital role in the culture and economy of Hawaii.

After contact with Europe and America, Hawaii became an important port for provisioning and trading for the whaling industry. With the availability of new materials such as iron and steel instead of bone or wood, fishermen were able to modify their fishing methods and become more successful while still maintaining their cultural rituals. The excess of catch and a new cash economy during this time led to the opportunities for Hawaiians, and later foreign immigrants, to participate in this new economy through commercial fishing.

After the contracts of the Chinese, Portuguese, Filipino and Japanese immigrants brought to Hawaii to work on the sugar plantations expired, many became commercial fishermen, particularly the Japanese workers that came from coastal areas and had this expertise. With them, these immigrants brought new ideas and advanced fishing techniques unbeknownst to the islands including the sampan fishing vessel, which eventually led to a major pelagic fishery in Hawaii for tuna.

As fishermen and researchers explored farther out to sea and to different parts of the archipelago, they made discoveries that would lead to new fisheries. In the 1960s, researchers discovered a pink coral bed off of Oahu and fishermen started to harvest from this bed over the next three years using dredges. At the same time, a small group of divers were harvesting black coral using SCUBA. By the end of the decade, the precious coral fishery was producing over $2 million in retail sales. In the 1970s, scientists discovered substantial quantities of lobsters in the Northwestern Hawaiian Islands.

Right after the discovery, a crustacean fishery started up with lobster fishermen, primarily from the Pacific Northwest, employing advanced technology and equipment to harvest lobsters from the NWHI. This area also began to see an increase in bottomfish fishermen looking for snappers, groupers and jacks.

An increase in the harvest of these species opened up the restaurant market for fishermen and in turn expanded the bottomfish fishery in the main Hawaiian Islands. 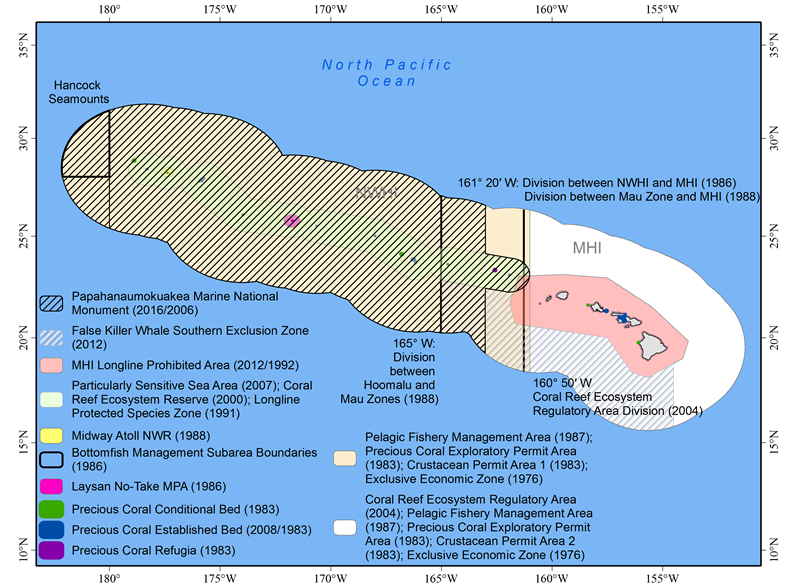 Today, fishing continues to play a central role in Hawaii with seafood consumption estimated at approximately two to three times higher than the rest of the U.S. While up to 75% of the seafood consumed is imported, there is still a demand for local catch. The local fishing is a mix of commercial, non-commercial, and subsistence fisheries targeting a variety of species.

For the purposes of the Council’s management, the fisheries are divided Pelagic and Island Fisheries. Pelagic Fisheries include longline fishing, trolling and handlines that target pelagic species such as tunas, mahimahi, billfish, and other deep sea fish. The Island Fisheries are made up of the bottomfish (deep 7 and non-deep 7), coral reef ecosystems, crustaceans, and precious corals. 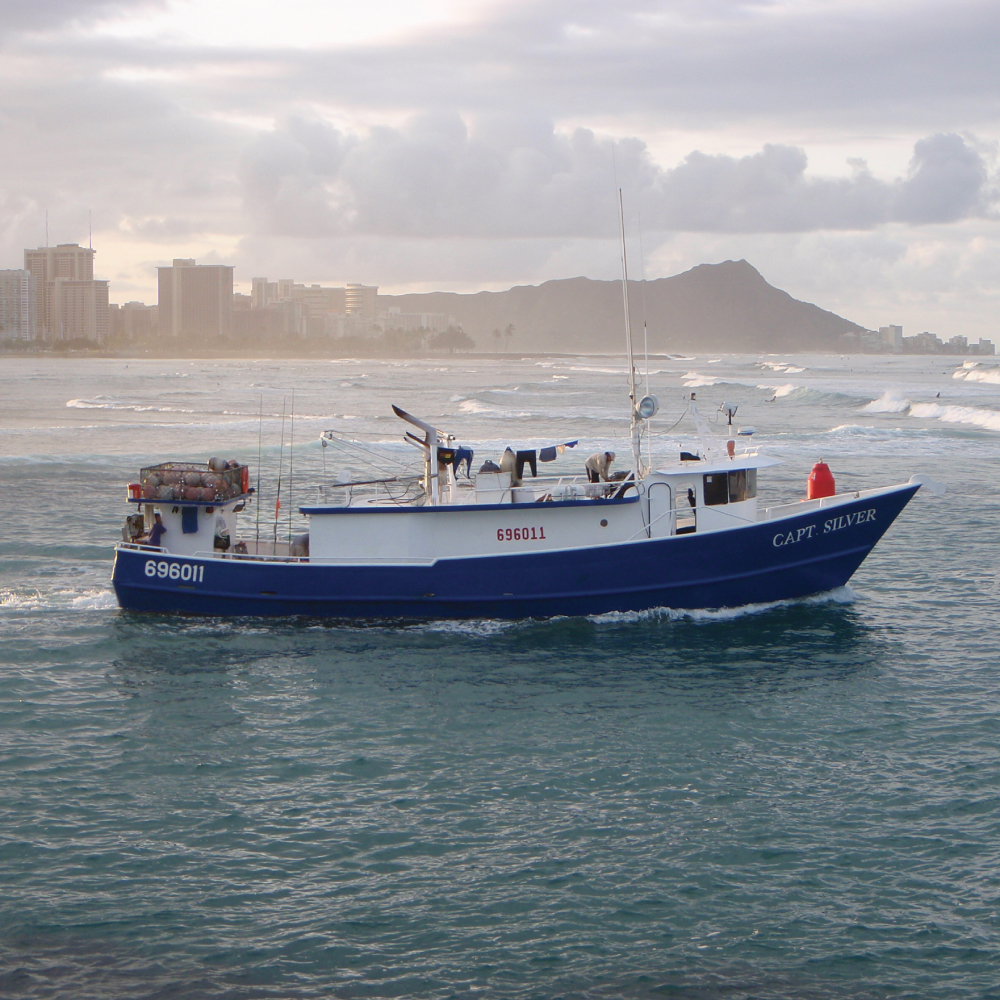 Compared to the other regions, Hawai`i has a diverse fishery sector which includes shallow- and deep-set longline, Main Hawaiian Islands (MHI) troll and handline, offshore handline, and the aku boat (pole and line) fisheries.

The Hawai`i deep-set longline fishery is by far the most important economically, accounting in 2020 for about 89% percent of the estimated ex-vessel value of the total commercial fish landings in the State.

The MHI troll was the second largest fishery in Hawai`i at 5% of the catch and revenue, respectively.

The shallow-set longline, MHI handline, aku boat, offshore handline fisheries and other gear types made up the remainder of the composition of the fishery.

Hawai`i commercial fisheries landed 30,399,000 pounds of pelagic species in 2020, a decrease of 17% from the previous year. The deep-set longline fishery targeted bigeye and yellowfin tuna. This was the largest of all pelagic fisheries and its total catch comprised 89% (27,061,000 pounds) of all pelagic fisheries. For more on the current status of the Pelagic Fisheries in Hawaii click on the pelagic annual report button below.

In 2020, the Main Hawaiian Island Deep 7 bottomfish fishery was characterized by decreasing trends in fishing effort and participation relative to measured averages. Though the number of fish caught and the pounds landed also decreased, effort and participation were lower and the CPUE for the fishery decreased relative to short- and long-term averages and lower than each of the past five years.

The Deep 7 catch was mostly from deep sea handline. The non-Deep 7 bottomfish fishery was dominated by uku (Aprion virescens) with nearly 48,000 lbs caught in 2020, which was still lower than the short and long-term averages.

In 2020, the crustacean fishery saw an decrease in participation, effort and pounds caught below the short and long term average. Considering the crustacean MUS evaluated, participation and catch values in the fishery for deepwater shrimp (Heterocarpus laevigatus) were not disclosed due to data confidentiality despite having shown an increase in catch and CPUE last year. Kona crab fishery statistics were down in 2020. There were 12 commercial license holders that reported 42 trips landing 4,200 pounds of Kona crab. The estimated CPUE increased to 100.01 pounds per trip for 2020.

National Standard 1 allows for the Regional Fishery Management Councils to identify species, species complexes, and stocks that would constitute Ecosystem Components (81 FR 71858, October 18, 2016). Ecosystem Components are species that contributes to the ecological functions of the island fisheries ecosystem. These species are retained in the Hawaii FEP for monitoring purposes and are protected associated with its role in the ecosystem and to address other ecosystem issues. 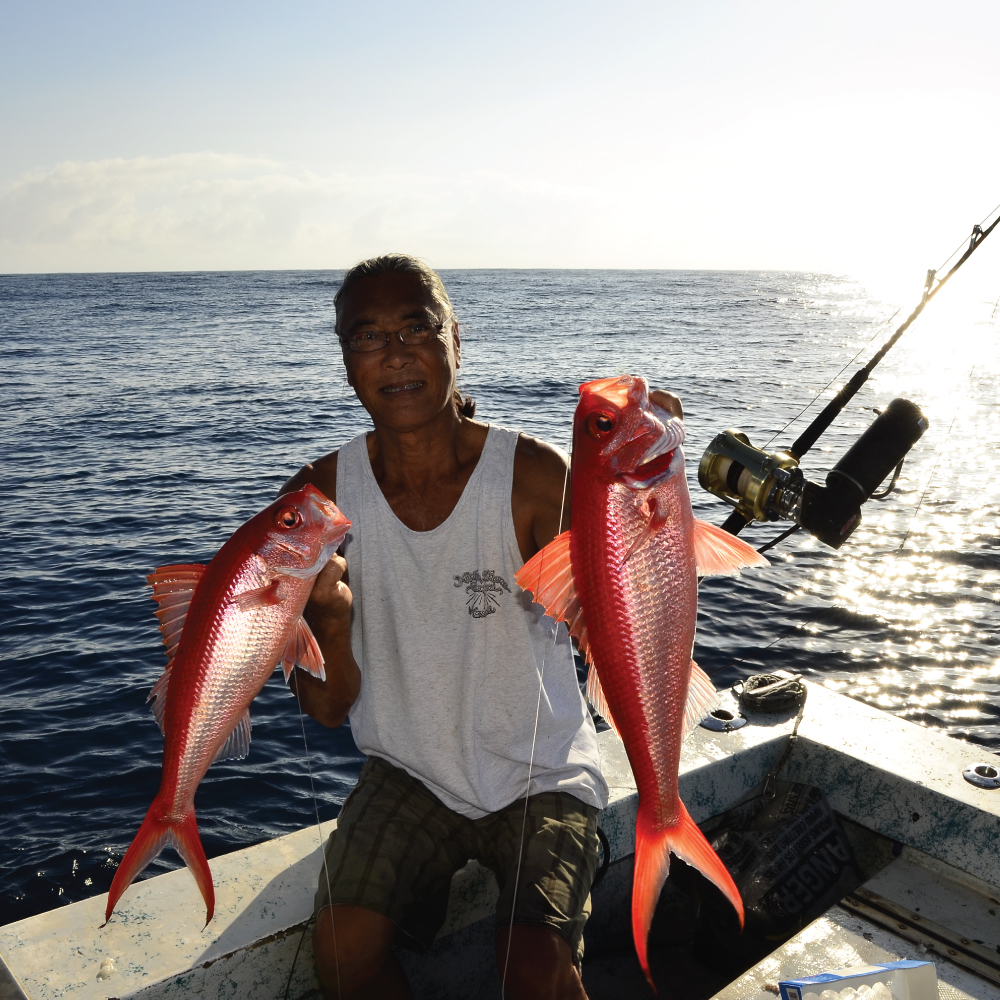 For more on the current status of Islands Fisheries in Hawaii, see the

HONOLULU (24 May 2022) An industry-led conservation measure to reduce impacts to oceanic whitetip sharks is the latest example in a long history of bottom-up federal fishery management through the Western Pacific Regional Fishery Management Council. Starting May 31,...
Read More

The Council held a workshop at the end of April 2022 that brought together indigenous Council members, advisory panel members, NOAA regional staff and leaders working on equity and environmental justice (EEJ) issues. The group talked about how EEJ integrates with...
Read More

HONOLULU (23 March 2022) The Western Pacific Regional Fishery Management Council discussed today its position on the future direction for the False Killer Whale (FKW) Take Reduction Plan and agreed to not support adoption of weaker hooks under the Plan due to the...
Read More

The MSA authorizes fishery management councils to create fishery management plans (FMPs). Since the 1980s, the Council has managed fisheries throughout the Western Pacific through separate species-based FMPs. However, the Council began moving towards an ecosystem-based approach to fisheries management and restructured its management framework from species-based FMPs to place-based Fishery Ecosystem Plans (FEPs). The FEP establishes the framework under which the Council will manage fishery resources. An overall Pacific Pelagic FEP was created because of the migratory nature of the pelagic species. Both the Pelagic and Hawaii FEPs were approved in 2009 and codified in 2010. These FEPs have been, and continue to be, amended as necessary. 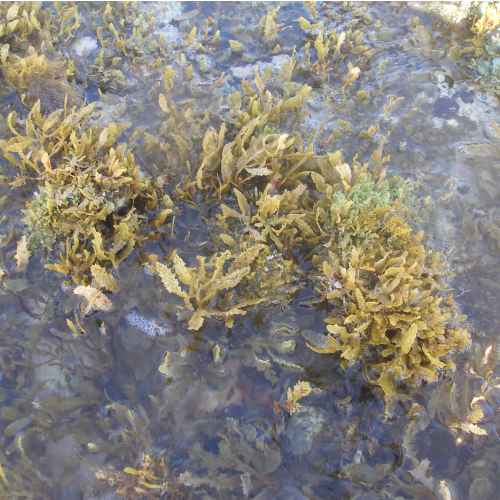 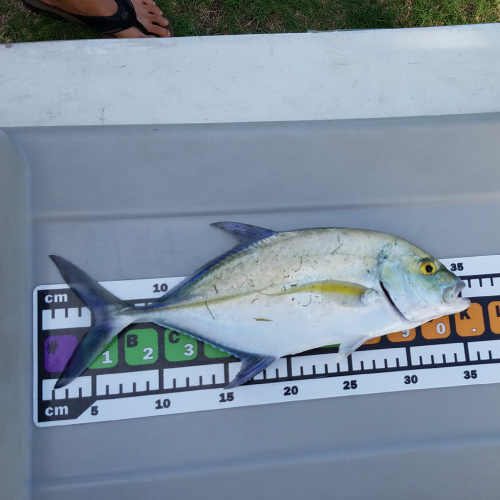 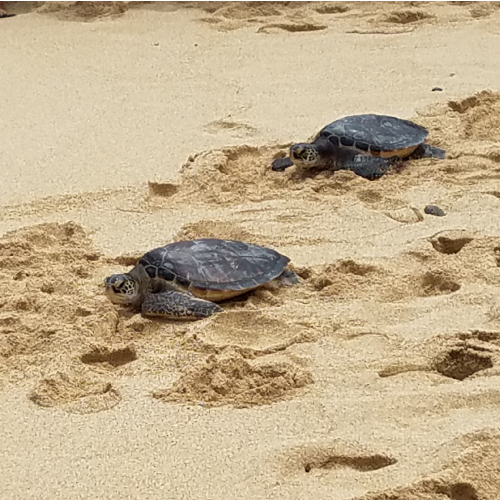 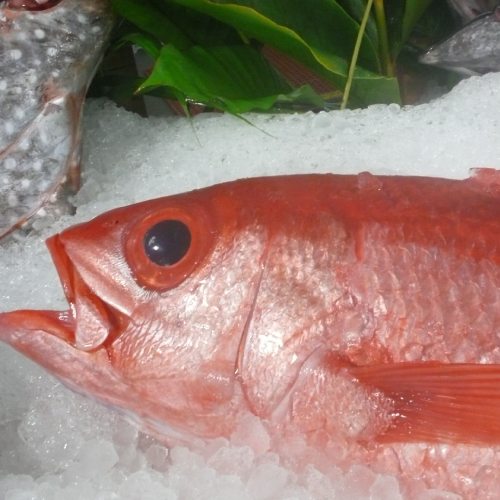 Marine Conservation Plans (MCPs) are required by the Magnuson-Stevens Fishery Conservation and Management Act (Section 204(4)) detailing the use of funds collected by the Secretary of Commerce pursuant to fishery agreements (e.g. Pacific Insular Area fishery agreement, quota transfer agreement, etc.).  These MCPs should be consistent with the fishery ecosystem plan, identify conservation and management objectives, and prioritize planned marine conservation projects.  The PRIA MCP is developed by the Council under MSA Section 204(7), the Western Pacific Sustainable Fisheries Fund (SFF).  The SFF provides funds received by the Secretary of Commerce under a Pacific Insular Area fishery agreement or contributions received in support of conservation and management objectives for areas other than American Samoa, Guam or the Northern Mariana Islands.    Click below for the PRIA’s latest Marine Conservation Plan

The Council has done a lot of work in the Hawaii Archipelago fisheries from research to workshops, to outreach and education. Below are some of the completed projects and publications.

The ancient Hawaiians fished in accordance with the various moon phases after making keen observations of the relationship between the moon phases and fishing activities over many years. Hawaiians used a variety of methods (e.g., traps, spears, canoes, nets, natural poisons) to fish or gather resources in the near-shore areas for coral reef related species and the deep seas for bottomfish and pelagic species as well as in the thousands of fishponds (loko i`a) across the islands.