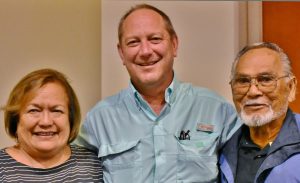 WAILEA, MAUI, HAWAII (12 June 2018) Federal fishery managers, meeting this week at the Wailea Beach Resort on Maui, Hawaii, have recommended an increase in the annual catch limit (ACL) for seven species of main Hawaiian Islands deep-water bottomfish species. The ACL increase from 306,000 pounds to 492,000 pounds would apply to fishing years 2018-19, 2019-20 and 2020-21. The new ACL recommended by the Western Pacific Regional Fishery Management Council is based on an assessment of the fish stock completed by the National Marine Fisheries Service (NMFS) in 2018. The recommendation will be sent to the Secretary of Commerce for final approval.

Known as the Deep 7, the species include hapu‘upu‘u (sea bass) and six snappers: opakapaka (pink snapper), onaga (longtail snapper), ehu (squirrelfish snapper), lehi (silver jaw jobfish), gindai (brigham’s snapper) and kalekale (von siebold’s snapper). The season for the fishery runs from September 1 to August 31 of the following year, unless the catch limit is reached before August 31. If the ACL is reached, the fishery would close for the remainder of the fishing year.

Among other actions taken by the Council during the first half of its June 11 to 13 meeting were the following:

As part of the Council meeting, a Fishers Forum on the Hawaii Deep 7 bottomfish fishery was held June 11, from 6 to 9 p.m. at the Maui Beach Hotel in Kahului. NOAA Assistant Administrator for Fisheries Chris Oliver attended the meeting and the Forum.

Background information and the agenda for the June 11 to 13 Council meeting, go to www.wpcouncil.org or email info.wpcouncil@noaa.gov. The Council meeting is open to the public and continues this afternoon and tomorrow to address protected species, administrative matters and management of pelagic, American Samoa and Mariana fisheries.