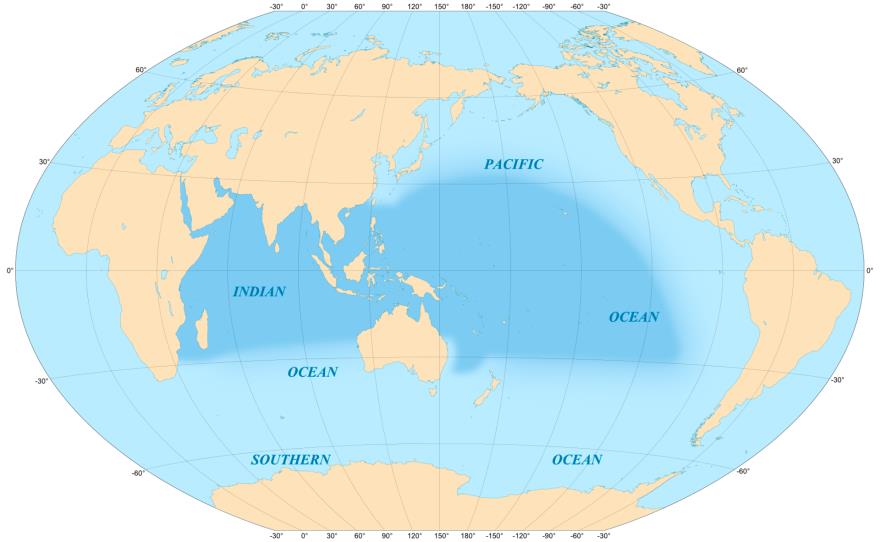 The Indo-Pacific is the epicenter of global maritime trade and geostrategic influence, where combatting the threat of IUU fishing is the most important to uphold America’s interests. Map courtesy of Eric Gaba – Wikimedia Commons.

On Monday, the Maritime Executive reported that for the first time since 2012, the Coast Guard’s Honolulu-based 14th District intercepted foreign vessels illegally operating within the US exclusive economic zone (EEZ) waters off Guam and Hawai’i.
“While regulation compliance among US fishers is near 97 percent, some of the lowest policed areas, such as the waters in the Western and Central Pacific, are responsible for the highest percentage of significant violations,” said Lt. Jason Holstead. He reported that the Coast Guard has addressed foreign incursions in the EEZs of partner countries and IUU fishing on the high seas but not in the US EEZ in the past eight years. 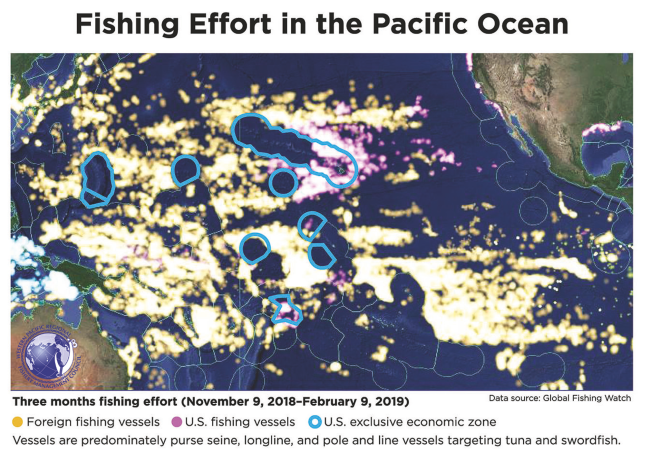 The interdiction of the foreign vessels in the US EEZ came on the heels of last week’s 2020 State of the United States Coast Guard address delivered by Admiral Karl Schultz. “China, with the world’s largest distant water fishing fleet, is one of the worst predatory fishing offenders, engaging in what we call illegal, unreported, unregulated fishing–or IUU,” Schultz said. “This is far more than just about conservation and sustainability, this is a national security challenge warranting a clear response.”
Schultz noted that many Pacific Island Countries, “and even American island territories, lack the capability and capacity to fully police their sovereign waters …”
“To enhance maritime domain awareness across the Pacific Ocean, we are fostering a partnership with Global Fishing Watch,”
Schultz said. Additionally, the Coast Guard is “on track to take delivery of the first two 154-foot Fast Response Cutters to be home-ported in Guam” by the end of the year, Schultz added. They will replace 40-year-old vessels and strengthen the Coast Guard’s capabilities in the region. 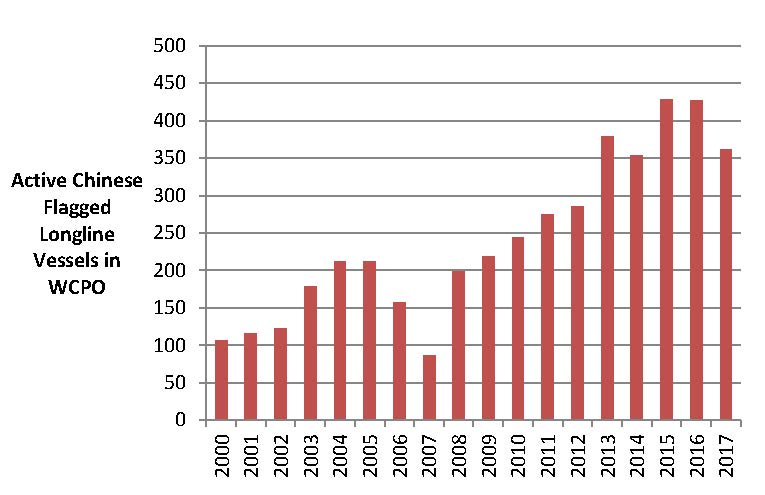 “We have advised the government over the years that China is an aggressive player in Oceania in search of natural gas, minerals, fish and other raw materials,” said Simonds. “This aggressiveness is in part demonstrated by its heavy subsidizing of its fishing fleets.” According to Marine Policy (vol. 68), in 2013 the Chinese central government spent $6.5 billion on fisheries subsidies. In recent years, China’s South Pacific albacore catch has increased to 40 to 50 percent of the total catch for all countries, while the catch by American Samoa has decreased to 2 percent of the total catch, which has jeopardized the local albacore longline fleet. In response, the Council recommended allowing the local fleet access to waters from 12 to 50 nautical miles of shore in the US EEZ around American Samoa. “It is good to see that our government has begun to recognize the threat to our nation’s fisheries in the Western Pacific,” Simonds said.
Sean Martin, president of the Hawaii Longline Association, noted that China’s presence is in the Eastern Pacific as well. It recently received a quota for 6,000 metric tons (mt) of longline-caught bigeye tuna transferred from Japan. Korea also received a 2,000-mt quota transfer from Japan. “One third of Hawai’i effort is in Eastern Pacific,” Martin said, noting that 8,000 mt is equivalent to the total annual bigeye tuna catch of the Hawai’i longline fleet in both the Western and Central Pacific and Eastern Pacific combined.
The issue of international tuna management and enforcement is on the agenda for the Council’s 181st meeting, which convene March 10-12 in Honolulu. Prior to this meeting, the Council’s Scientific and Statistical Committee will meet next week to review the scientific aspects of the topics on the Council’s agenda. For more information on these meetings, go to http://www.wpcouncil.org/meetings-calendars/ or contact the Council at (808) 522-8220 or by email at info.wpcouncil@noaa.gov.