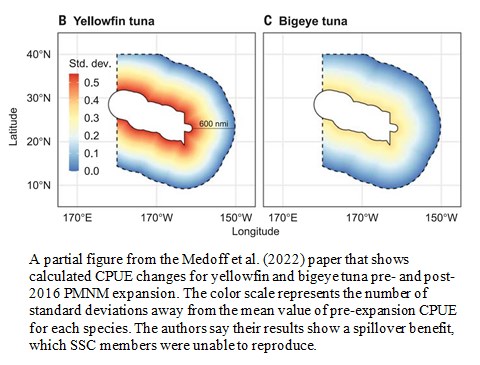 HONOLULU (23 November 2022) HONOLULU (30 November 2022) The Council’s Scientific and Statistical Committee (SSC) at its meeting yesterday discussed a critique of a recently published paper on “Spillover benefits from the world’s largest fully protected MPA,” referring to reported benefits from expanding the Papahānaumokuākea Marine National Monument (PMNM) in 2016. SSC member Ray Hilborn summarized analyses that point out flaws in the paper’s conclusions.

The 2022 paper by Sarah Medoff and her collaborators claimed that tuna catch per unit effort (CPUE) rose faster close to the PMNM boundary after 2016, and the amount of increase diminished as one moves farther from the boundary. The authors say this infers a spillover effect of the increased abundance inside the Monument into the ocean beyond the border.

A group of scientists including SSC members and other prominent stock assessment scientists attempted to replicate the study’s results, but were unable to find the same conclusions.

“When we look at all of the data, we simply don’t see what they estimated,” said Hilborn. “In general, CPUE increased faster the farther away you are from the PMNM after the closure – this is the opposite of what the paper says.”

A machine learning analysis conducted by SSC member Milani Chaloupka also showed that the higher yellowfin tuna catch rates seen after 2016 extended out to about 550 km from the PMNM, rather than only in the immediate vicinity. This suggested the changes in catch rates based on distance from shore were likely due to environmental changes.

Chaloupka noted, “Science needs to be reproducible, but we are not finding that through our explorations.”

Around the time the PMNM was expanded, yellowfin tuna recruitment also increased across the Pacific, a key piece of information missing from the original paper’s findings.

The SSC also heard a report on public meetings held in November 2022 soliciting community feedback on potential fishing regulations in the Northwestern Hawaiian Islands Monument Expansion Area (MEA). The Council is considering developing recommendations for federal permitting and reporting and limits on species, gears and catch. Communities across the state supported providing fishing opportunities in the MEA, whether for commercial, noncommercial or Native Hawaiian purposes.

The SSC discussion focused on customary exchange and subsistence fishing definitions and the diverse social, cultural and traditional benefits fish provide to underserved populations and broader island communities. The Committee noted customary exchange is just another term for generalized reciprocities and is distinct from barter as there is no negotiation involved. The SSC recommended that any potential fishing permits developed should include data collection, reporting and monitoring in line with federal fishery ecosystem plan requirements. Any fishery should have limits that are managed based on stock assessments or other science-based information.

In 2016, Presidential Proclamation No. 9478 set aside an area of 50 to 200 nautical miles (the outer boundary of the U.S. exclusive economic zone) adjacent to the PMNM. The Proclamation provides for management of activities and species under the Magnuson-Stevens Act, including noncommercial fishing and Native Hawaiian practices.

The SSC heard a presentation on an Ecosystem-Based Fisheries Management (EBFM) workshop with Council and NMFS staffs. The fishery managers and scientists met Oct. 4, 2022, to map out the implementation of EBFM in the Pacific Islands Region. The workshop provided an opportunity to share office-specific priorities and to develop a process that will guide EBFM efforts over the next five to 10 years.

Going forward, a subset of workshop participants will meet quarterly to identify projects and refine the process needed to implement EBFM into upcoming fishery stock assessments and increase the confidence in data that informs marine policy.

In 2001, the Council was the first regional fishery management council in the nation to develop an ecosystem-based management plan. It held three EBFM workshops in the mid-2000s, prior to restructuring its Fishery Management Plans in 2009 to five Fishery Ecosystem Plans, shifting the management focus from a species-based to ecosystem-based conservation approach.

The Council will consider recommendations and advice from the SSC on these and other matters when it meets Dec. 5-8, 2022, in-person at the Pagoda Hotel. Instructions on connecting to the web conference, agendas and briefing documents are posted at www.wpcouncil.org/event/193rd-council-meeting.