HONOLULU (18 October 2018) Scientists from throughout the Pacific concluded their three-day meeting yesterday in Hilo on the island of Hawai‘i recommending that the Western Pacific Regional Fishery Management Council take initial action to require mandatory electronic reporting for the Hawaii longline fleet. These and other recommendations by the Council’s Scientific and Statistical Committee (SSC) on federally managed fisheries of Hawaii, American Samoa, Guam, the Commonwealth of the Northern Mariana Islands (CNMI) and the US Pacific Remote Islands will be considered by the Council at its 174th meeting to be held Oct. 23 and 24 in Saipan, CNMI, and Oct. 26 and 27 in Guam. Under the Magnuson-Stevens Fishery Conservation and Management Act of 1976, the Council has authority over fisheries seaward of state waters in Hawaii and other US Pacific Islands. 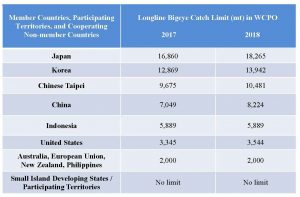 The SSC also commented on the recommendation made by the majority of the Permanent Advisory Committee (PAC) to Advise the US Commissioners to the Western and Central Pacific Fisheries Commission (WCPFC). The PAC, which is comprised mostly of US tuna fishing industry representatives, met Oct. 11-12, in Honolulu. The Council may consider endorsing the PAC majority recommendation or adopting other recommendations to the US government in forming positions for the December WCPFC meeting. The PAC majority recommended that the United States obtain a larger bigeye longline catch limit of 6,000 metric tons (mt). The SSC recognized that the highly monitored Hawaii longline fishery, which is the only fishery utilizing the US quota, does not transship fish at sea and exceeds the WCPFC minimum observer coverage of 5 percent. The mandatory Hawaii longline observer coverage is 20 percent for the deep-set and 100 percent for the shallow-set fishery. The SSC further noted that an increase of the US longline bigeye catch limit would be consistent with the WCPFC Scientific Committee management advice if the total longline bigeye catch level remains below 89,000 mt, purse-seine effort remains within expected levels and the recent bigeye recruitment trend continues.

The SSC deferred consideration on management of loggerhead and leatherback sea turtle interactions in the Hawaii shallow-set longline fishery as the National Marine Fisheries Service (NMFS) Pacific Islands Regional Office has not completed the new draft biological opinion on the fishery, which was due on Oct. 1. The SSC did review a loggerhead and leatherback turtle population vulnerability assessment by the NMFS Pacific Islands Fisheries Science Center and noted that it did not evaluate the effect of management action on the populations but that development of this functionality could further enhance the utility of the approach.

For complete agendas and background materials on these meetings, go to www.wpcouncil.org/category/upcoming-council-and-advisory-body-meetings or contact the Council at info.wpcouncil@noaa.gov or (808) 522-8220.