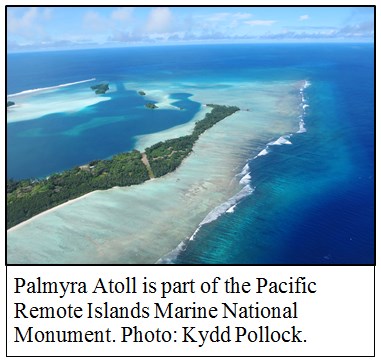 HONOLULU (15 June 2022) The Council’s Scientific and Statistical Committee discussed a report written by the area-based management subcommittee of the Council Coordination Committee (CCC) to address the Biden Administration’s America the Beautiful initiative. The initiative’s goal is to “conserve” 30% of U.S. lands and waters by 2030. The purpose of the report was to take inventory of existing managed areas in the U.S. exclusive economic zone (EEZ) relative to the 30×30 initiative and discuss pros and cons of area-based management.

The subcommittee developed a draft definition of conservation areas to identify qualifying regions since none exists elsewhere. The Western Pacific Region (WPR) is the largest managed ocean area (~1.7 million square nautical miles) in the United States, and more than 60% of its waters (1,032,825 nm2) meet the America the Beautiful criteria. The WPR alone already meets 29% of the initiative’s goal.

The SSC suggested the Council request a comprehensive evaluation of the unintended consequences of the proposed expansion and that any measures be evaluated through a transparent and public process prior to implementation. SSC members clarified unintended consequences of the expansion range from displacement of U.S. fisheries by competing foreign fisheries to reduced supply of U.S.-caught fish to the American Samoa cannery.

The SSC also discussed the development of a University of Hawai‘i (UH) Fisheries Program, which may be based on a Coastal and Marine Resources graduate program approved (but not enacted) in 2005. Fisheries play a large role in the culture, food security, and economic development of the WPR. A fisheries education program is needed to build capacity for employment and professional development in Hawai‘i and the U.S. Pacific Territories. Academic and professional development infrastructure is lacking outside of the continental United States.

SSC members expressed support for the program and noted Council staff will contact faculty and administrators at UH to express support and assistance. The SSC recommended revisiting this issue at its September 2022 meeting.

The SSC heard an update on Equity and Environmental Justice (EEJ) activities in the WPR, including a CCC working group report (https://tinyurl.com/EEJReport) that defines EEJ issues within a U.S. fisheries management context, and a WPR EEJ in Fisheries Management workshop. The workshop included discussion on the Council’s impact and contributions in advancing EEJ for WPR fisheries. Participants provided insights into how the Council can leverage several tools—fund, implement, empower, and advocate—to effect change.

The SSC also discussed the National Marine Fisheries Service (NMFS) draft EEJ strategy, which identified barriers to EEJ and how the agency plans to address issues in underserved communities. This will lead to step-down implementation plans at the regional level to create a framework to incorporate EEJ into NMFS’ daily activities. SSC members highlighted the importance of inclusive governance and noted several barriers, including system complexity, overuse of jargon, and the public’s negative attitude and distrust of the process.