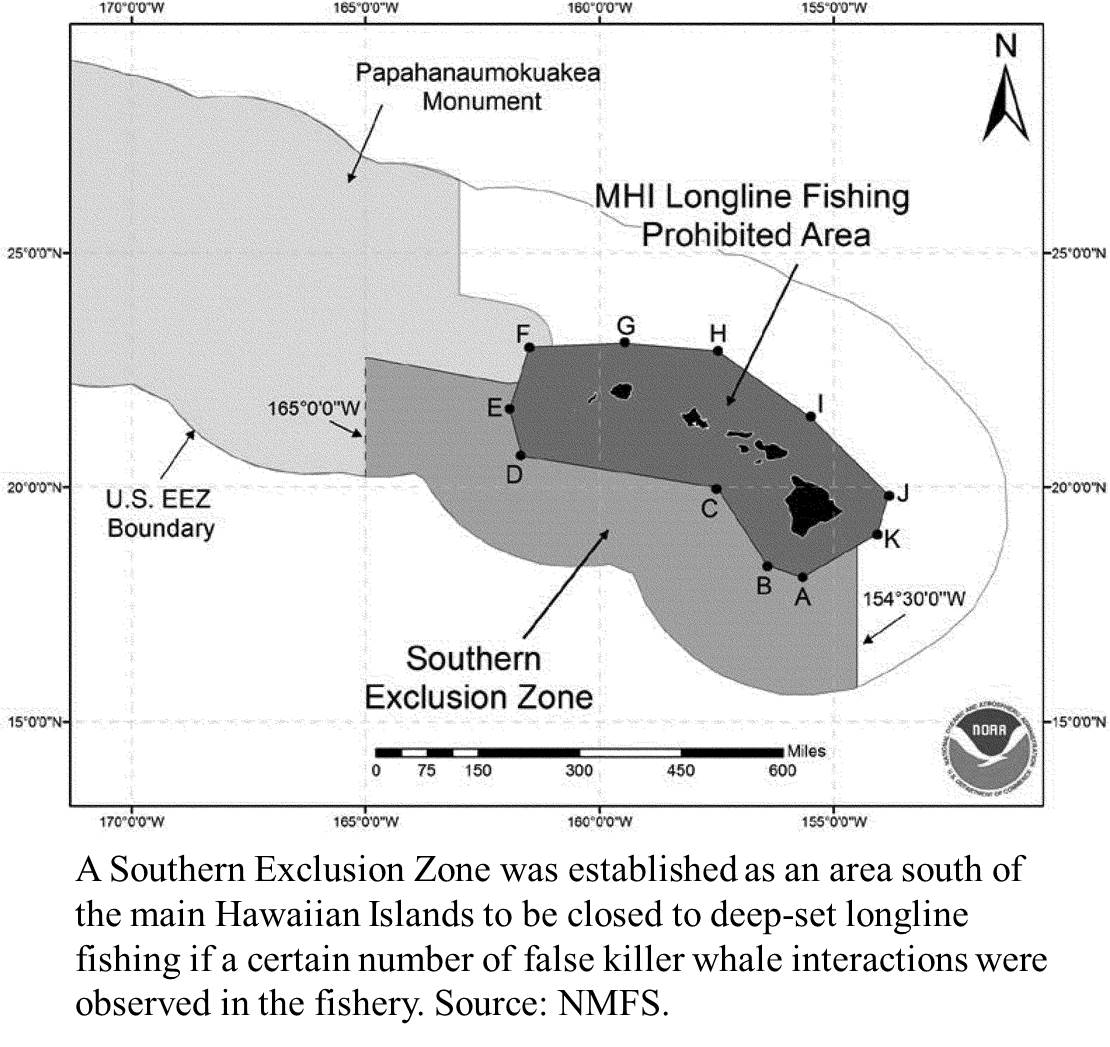 The SSC reviewed a Pacific Islands Fisheries Science Center (PIFSC) analysis evaluating the effects of a triggered area closure called the Southern Exclusion Zone. The SEZ was established under the National Marine Fisheries Service’s False Killer Whale Take Reduction Plan as part of a suite of measures intended to reduce impacts to these large-toothed whales. The analysis confirmed the Hawai‘i longline fishing effort shifted to areas immediately south and east of the closure area during SEZ closures (July-December 2018; and February 2019-August 2020).

“There are tradeoffs to the closure,” said SSC member Steve Martell. “In areas outside the SEZ, fishermen have higher chances of interacting with other protected species like oceanic whitetip sharks and giant manta rays. Fishermen may also have more competition with foreign fishing boats in the area.” The SSC recognized that while these exchanges are likely happening, the current analysis did not quantify the extent to which other species of concern may have been negatively affected by the false killer whale measure. The SSC recommended further analyses to evaluate these effects.

The SSC also emphasized the need for a comprehensive approach to address potential cross-species conflicts and tradeoffs of species-specific bycatch mitigation measures in the Hawai‘i longline fishery. Many of the existing conservation measures implemented in the fishery have been developed to reduce impacts to one species or species group, such as sea turtles, seabirds or sharks.

The SSC reviewed new data from a recent PIFSC study supporting the benefit to Endangered Species Act-listed oceanic whitetip sharks from the Hawai‘i deep-set longline fishery’s transition from wire leaders to monofilament nylon leaders earlier this year. Sharks can bite through nylon leaders easier than wire and have a higher chance of freeing themselves. The same study highlighted the downside of this strategy. The slower degradation rate of monofilament line in the ocean means that trailing line left on the shark may have greater consequences than wire leaders that were shown to start breaking off after 2 months. Hawai‘i’s longline fishermen are also required to cut the line as close to the hook as possible when releasing oceanic whitetip sharks. This comes with crew safety issues due to flyback caused by the required use of weights close to the hook to reduce interactions with Laysan and black-footed albatrosses.

To better communicate these complex multi-species considerations, the SSC recommended the Council develop an infographic on the potential effects of several management measures on various species.

“There will be ‘winners’ and ‘losers’ in terms of species and fisheries as ecosystem changes become an increasingly important concern in our region,” said Frank Camacho, SSC member from Guam, reporting on the discussions from the meeting. “We need to develop tools to handle changes in species abundances that are expected to happen in response to changing environmental conditions.” The SSC recommended prioritizing the development of these tools, and conducting scenario planning for extreme environmental events to assist with economic and social resilience of fishing communities.

While the Council has incorporated ecosystem-based considerations into its fishery management plans since the mid-2000s, methods to quantify the point at which a fish or habitat cannot recover are still evolving. The SSC discussed a PIFSC project that is the first step towards developing EBFM frameworks applicable to management. Utilizing existing data sets, the project identified threshold relationships between ecosystem indicators and environmental drivers and estimated thresholds for coral reef ecosystem species. SSC members provided feedback on statistical methods and future directions noting an interest in how the project will inform management targets.

Moving forward, Council, PIFSC and Pacific Islands Regional Office staffs will host a workshop in October 2022 to streamline EBFM priorities in the Pacific Islands region. The workshop goal is to develop a region-wide road map with actionable EBFM items to be addressed in the short- and long-term (5 and 10+ years). Following this, the Council and NMFS will likely hold a series of public workshops to engage stakeholders in the region on EBFM approaches.